Written by George Britten
Updated over a week ago

Recording performance against what was planned can be one of the most time-consuming, inaccurate parts of construction planning. Aphex helps projects capture consistent performance records across every day of work in the plan without burdening the team building and updating plans with delay logs. In Aphex, performance of work is simply tracked by recording changes to Tasks over time, these records are referred to as Statuses.

Every Task exists in one of five Statuses (Backlog, Planned, In Progress, Complete and Promised) that determines the Task's record of performance and ability to record Status Updates. As Tasks in the plan start they become In Progress are committed, getting "locked-down", similar to the Last Planner System. Work in the plan is automatically assumed to be achieved until it is updated.

Delayed Tasks have committed days indicated in dark blue with a count of days delayed indicated on the right of the Task Bar.

A dotted line indicates a late start - when a Task's start date has been shifted.

When you edit the dates of a committed Task, Aphex records a Status Update against the change in your plan, these records of performance capture consistent data to ensure accurate, meaningful records over time.

A Task's Status Updates can be viewed in full from the Status section of a Task's Inspect Panel. 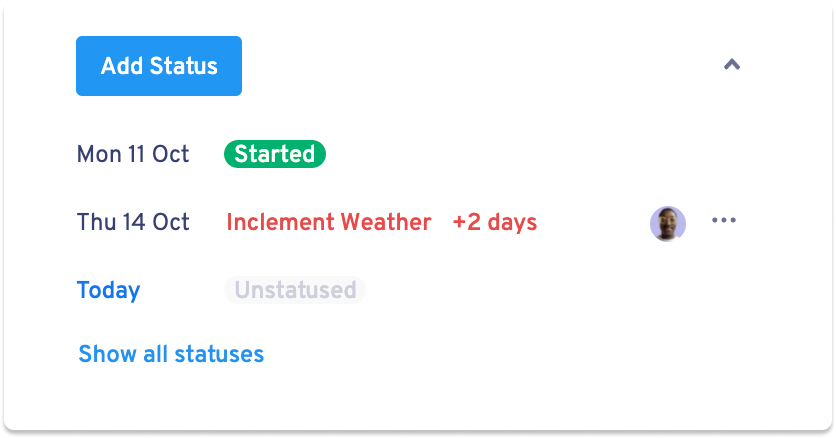 The real magic happens when a Delay is recorded. Rather than spending time maintaining those Delay Logs, Aphex automatically prompts teams to record key data against the edit in your plan.

Recording Performance from the Inspect Panel

The Status section of a Task's Inspect Panel is where you can find a detailed breakdown of Task's performance in the form of Status Updates. Here you can also record a Status Update by clicking Add a Status.

Did this answer your question?